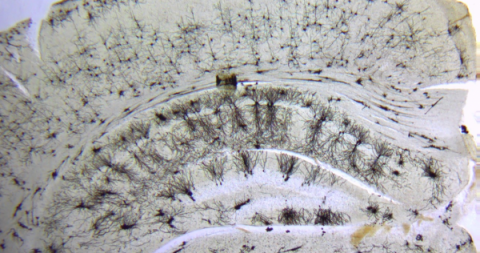 The primary focus of research in the Abel lab is to understand the cellular and molecular mechanisms of long-term memory storage with a focus on the mammalian hippocampus. One of the hallmarks of long-term memory storage is that it requires the synthesis of new genes and new proteins, which act to alter the strength of synaptic connections within appropriate neuronal circuits in the brain. How are the various signals acting on a neuron integrated to give rise to appropriate changes in gene expression? How are changes in gene expression maintained to sustain memories for days, months and even years? In our lab, we have focused on transcriptional co-activators such as CREB-binding protein (CBP) and investigated the role of histone acetylation and other epigenetic modifications in memory storage. Signals from synapses drive the transcriptional processes that are required for memory storage. A major challenge in the study of these synaptic signals is how the pathway specificity of synaptic plasticity is maintained in the face of diffusible second messengers, such as cyclic AMP (cAMP), and diffusible proteins, such as the catalytic subunit of protein kinase A (PKA). We are investigating the role of A-kinase anchoring proteins (AKAPs), which restrict PKA to specific subcellular locations, to define how signal transduction pathways in neurons are able to exhibit spatial specificity.

We are also exploring processes that can modulate long-term memory. For example, the biological function of sleep has remained elusive, but studies suggest that one function of sleep may be to mediate memory storage. First, sleep appears to facilitate the formation of hippocampus-dependent memories, and sleep is increased following training. Second, sleep appears to be regulated by many of the same molecular processes that contribute to memory storage, including the transcription factor cAMP response element-binding protein (CREB) and the PKA signaling pathway. By using conditional genetic and viral approaches and gene expression studies, we are striving to elucidate the machinery underlying sleep/wake regulation and define the role of sleep in the consolidation of long-term memory. Our studies have revealed that sleep deprivation impairs memory consolidation and synaptic plasticity by impairing signaling through the cAMP pathway and altering dendritic spine structure and protein synthesis.

Cognitive deficits accompany many neurological, psychiatric and neurodevelopmental disorders. We are interested in using mouse models to understand the structural, behavioral, and genetic underpinnings of schizophrenia and autism spectrum disorder. In an effort to model autism spectrum disorder, we have conducted an extensive study of behavioral phenotypes in several mouse models. Our studies have revealed that several mouse models of autism exhibit deficits in motivation and reward-based learning, processes that are mediated by the basal ganglia. Our investigation of striatal-based behaviors and learning may provide unique insights into the basis of autism spectrum disorder, including the striking male bias of this disorder. With these translational approaches, we hope to identify novel targets for the development of new therapeutics to treat psychiatric and neurodevelopmental disorders.